Last month on the 73rd anniversary of the Coconut Grove fire I reblogged a post about my mom, Goody Goodelle, who saw the fire start and with clear thinking was one of the very few people to get out alive. In the comments section of the original post, James Prince of The Core Theater in Richardson, TX (near Dallas) reached out to me for more information on Goody. 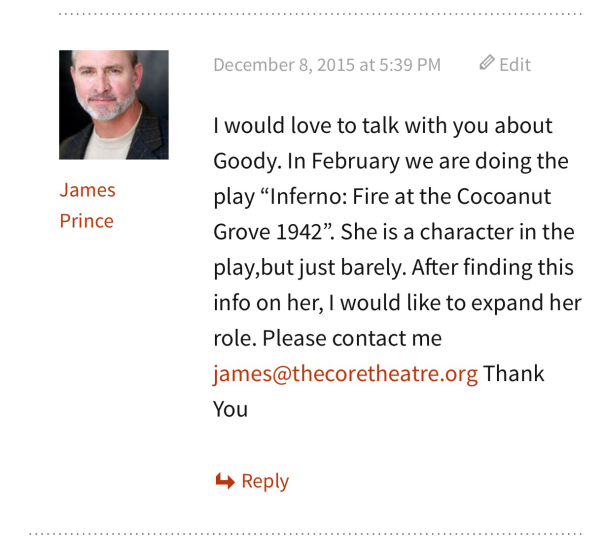 The Core Theatre is taking “Inferno! Fire at the Cocoanut Grove” to Boston. They need your help to get there. More information is available on their Go Fund Me page. Be sure to watch the video.

“So, I saw that his theatre is in Richardson, TX. That’s where Jan’s niece, Susan, and her family live. So I sent Susan an FB message and asked if she’d heard of his theater. She tells me he goes to her church and she knows him and that he is very talented. As Susan said in her message back to me . . . mind blown. I will keep you posted.”

I don’t ask for much (OK I ask for a lot at least as far as the Mrs is concerned), but please take a look at the Go Fund Me page and contribute what you can if you find value in the project.

Today marks the 73rd anniversary of the Cocoanut Grove Fire.

It seems fitting to repost this … (very long post, but I hope you will read it to the end)

So Ye Olde Kid Sister (YOKS) calls me up this morning to wish me Happy Birthday and informs me that they renamed the street in front of the Cocoanut Grove Nightclub from Shawmut Street Extension to Cocoanut Grove Lane.

In my mind I thought yeah that’s right, I am going to post a blog entry on … November 28 … oh ‘sh1+’. Well with the Mrs in hospital the week before Thanksgiving and the Thanksgiving holiday (where I did all the cooking), I suppose you can forgive me for not getting this out on time.

The Cocoanut Grove was Boston’s premier nightclub during the post-Prohibition 1930s and 1940s. On November 28, 1942, this club was the scene of the deadliest nightclub fire in history, killing 492 people (which was 32 more than the building’s authorized capacity) and injuring hundreds more. The enormity of the tragedy shocked the nation and briefly replaced the events of World War II in newspaper headlines. It led to a reform of safety standards and codes across the country, and major changes in the treatment and rehabilitation of burn victims.

It was the second-deadliest single-building fire in American history; only the 1903 Iroquois Theatre fire in Chicago had a higher death toll, of 602.

Official reports state that the fire started at about 10:15 p.m. in the dark, intimate Melody Lounge downstairs. A young pianist and singer, Goody Goodelle, was performing on a revolving stage, surrounded by artificial palm trees. It was believed that a young man, possibly a soldier, had removed a light bulb in order to give himself privacy while kissing his date. Stanley Tomaszewski—a 16-year-old busboy—was instructed to put the light back on by retightening the bulb. As he attempted to tighten the light bulb in its socket, the bulb fell from his hand. In the dimly-lit lounge, Tomaszewski, unable to see the socket, lit a match to illuminate the area, found the socket, extinguished the match, and replaced the bulb. Almost immediately, patrons saw something ignite in the canopy of artificial palm fronds draped above the tables (although the official report doubts the connection between the match and the subsequent fire).