I had been meaning to blog this for a while, but David Cummings saved me the trouble … and beat me to it (by a year or more). 🙂
Note that ‘lfrank’ comments:
This is a Kenny Chesney song called “The Life” 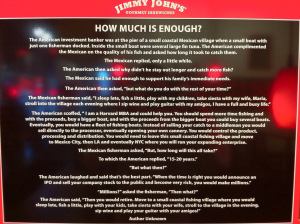 Two weeks ago I was at Jimmy John’s in Buckhead near my house and there was a sign on the wall with a parable (see photo I took from iPhone to the right). Here is the story titled How Much is Enough:

The American investment banker was at the pier of a small coastal Mexican village when a small boat with just one fisherman docked. Inside the small boat were several large fin tuna. The American complimented the Mexican on the quality of his fish and asked how long it took to catch them.

The Mexican replied, “only a little while.”

The American then asked why he didn’t stay out longer and catch more fish?

The Mexican said he had enough to support his family’s immediate needs.

The American then asked, “but what do you do with the rest of your time?”