“Sir, Deep Space Radar reports contact with object entering the system. It has an unusually high radar cross-section. That is, it’s too reflective to be natural. It appears to be on a collision course with us.”

“Contact Orbital Defense. See if they can intercept. We need a better look at this thing.”

So it began. We always knew it might happen – encounter with other life forms than our own. Reports had been made as long as anyone could remember of sightings, meetings, abductions, but these had always been explained away. This however had a different feel to it. This could be real.

“Sir, Orbital Defense can get a high-speed probe launched by morning. We will be able to get high-res images from it. I recommend you get some sleep while you can. If this is what we think it is, you will need your sleep now.”

“Yes I suppose you are correct.” I had special sleeping quarters set up for such things. I would not need to leave.

I slept fitfully through the night. Perhaps it was nothing. But what if? What if it were real? How do we tell the rest of the world? Would it cause panic? Could we keep it a secret? So many considerations.

I awoke early. “Contact Orbital Defense. Get me a status report … and keep this on a secure channel.”

I wait. Nothing else to do.

“Sir, Deep Space Radar reports multiple attempts to hail the object. No response. They are attempting both analog and digital signaling across the frequency band. The object remains quiet. It does however appear to have an extremely faint heat signature.”

“What about Orbital Defense?”

“Contacting them now. Standby … Sir, the probe has been launched. It will perform a close fly-by. Based on what we see, they are ready to take more drastic action.”

Inside the control room one did not know if it was light or dark outside. The waiting was the worst part.

“Sir, Long Range Imaging has acquired the object. I am putting it on the display.”

“This is from the probe?”

Even at this poor resolution, it looked artificial. The main body was circular. Although barely visible, there appeared to be three ‘arms’ jutting out from the main body equidistantly arranged. The whole thing was rotating. I watched it in fascination. “What is this thing?” I asked myself. At this distance it was difficult to gauge its size. Time seemed to stand still as I stared at the image on the display.

“Deep Space Radar has determined that it will miss us.”

“Not exactly sir, but it appears to be too small to be inhabited. Orbital Defense believes it to be some kind of robotic probe.”

“Interesting. Can we capture it?”

“At its current speed that would be difficult to do. Orbital Defense says that we are lucky that they could get the probe launched in time. They do want to know if you want it destroyed. That they can do.”

“If it is not on a collision course and it is that small I can’t see that it poses any danger. Let’s wait for the probe images.”

The image has grown larger on the screen. It is definitely spinning, slowly spinning. Its structure is beginning to resolve. It appears to be quite spindly, flimsy. Certainly no threat. Even if it were on a direct collision course it would almost instantly disintegrate and burn up when it hit the atmosphere. No threat whatsoever, yet quite the curiosity. I found myself wishing there were a way to study it longer.

“Contact Orbital Defense. Ask them if they can ready a second probe to rendezvous and pace it once it passes us.”

“Sir, Orbital Defense says to tell you to be thankful that they have a probe heading to it now. They won’t be able to launch another probe until after the object has passed through the system on the other side. They also want to reassure you that even though the encounter will be brief, that the probe has sufficiently high-speed and high-resolution imagers to capture every bit of detail.”

“Understood, give them my thanks.”

And so I continue to wait. The image on the screen is larger still, but at this distance and magnification the image is no clearer.

“Sir, Orbital Defense has switched on the imagers. Based on the combined closing speed of the probe and the object, the encounter will be extremely short. Less than one rotational period of the object. Orbital Defense regrets that this is the best they can do. There will be too much information to process in real time. First images will not be available until after the encounter.”

I continue to watch the object on the Long Range telescope image. Suddenly the probe is in view, obscuring the object. Then just as quickly it shrinks in size. The extreme telescopic magnification has foreshortened the entire scene. The probe is now disappearing into the distance, shrinking to a point. Like the two high speed projectiles that they are, they pass each other in a fleeting instant.

“Make sure we are recording all of the Long Range telescope images.”

The object is now passing the orbiting telescope. It is obvious that the circular component of the object is actually a thin sliver of a sphere, pointing in the opposite direction of the forward motion. Perhaps it is part of a propulsion system or possibly a communications system. Two of the ‘arms’ sticking radially out from it are shorter than the third ‘arm’. These shorter arms appear to be holding something at their ends that have an ever-so-faint heat signature. The third arm appears to be a single rod perhaps twice as long as the other two arms. I hope that the probe images will be more enlightening.

The object has now passed us and is slowly turning back to where it looks like a circle with three spinning arms.

“High-res images coming in now, sir. Putting them on the display.”

I marvel at the detail I am seeing. The probe images truly are spectacular. The scientists will be studying these images for the rest of their lives. I wonder where it came from?

The encounter was short lived and uneventful. The object came and went without anyone being the wiser. No need to panic to public. A very select group of analysts with the highest security clearance was selected to study the probe images. They would be busy for a while.

“Sir, the analysts have isolated a very interesting image of what appears to be a warning message on the side of the object. Their current thinking is that the object was some kind of a messenger sent out by an alien race to warn others to stay away. They suspect that many of these messengers were sent out in all directions as a warning. It is likely that it originally transmitted some form of warning signal, but that its power supply ran out. It may have even been armed with advanced weaponry. If so we are lucky that its power supply was drained. The analysts suspect that the warning message on the side was a last resort in case power was lost. I am putting it on the screen now.”

I recoiled in horror at what I was looking at. Standing in front of a rough sketch of the warning messenger craft were two of the most hideous creatures I had ever seen. The larger of the two creatures was obviously gesturing to stop approaching and stay away. They were scary and it was obvious that were not to be messed with.

Next to them was a depiction of what must have been one of their weapons, either emanating beams of destructive force or focusing energy to a single point. Either way the message was obvious. Stay away or you will be destroyed.

To further emphasize the warning, above the death rays was a symbolic representation of matter and anti-matter. As if to say that they had the ability to annihilate anyone or anything they chose.

Along the bottom there appears to be a graphic of their home system. I can only guess that this is to depict the strength and power of their numerous planets and abundant resources.

I will include a copy of the warning below. 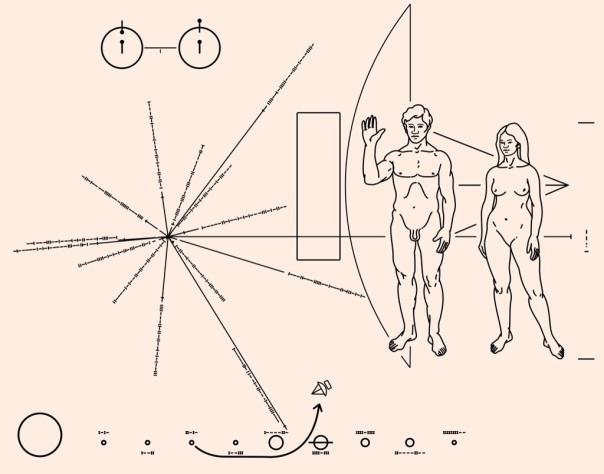