This is the story behind The Race …

Christmas 2003, “Number One Son” gave me the very first Sony Cyber-shot DSC-T1, that he had picked up while studying abroad in Japan. It had not yet been released in the states. 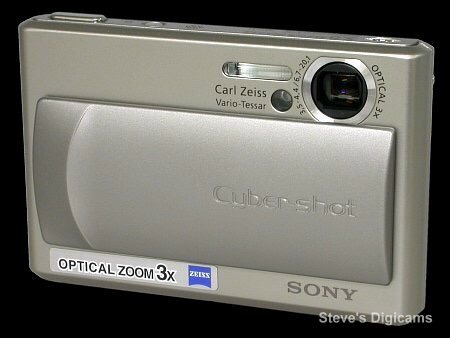 This was the first camera I could carry in my pocket. I could take it everywhere. With the USB cable I could relatively easily transfer pictures from it to my computer. I had QuickTime Pro on my computer and realized that if the pictures were numbered sequentially QuickTime could turn them into a movie. I began to experiment with stop action animation and time lapse photography. The Race is one of my best.

I had to build a holder for the camera in order to mount it to a tripod. The actors were my sons’ Warhammer figures, Russian toy cars I had collected in the 90s while working there, other toy vehicles, a cat toy, and a robotic spider.

The entire video at 6fps (frames per second) is only 30 seconds long. I filmed the actual race first on the 19th of June and then decided to film the starting line sequence the next day to extend the length. I initially used the Beatles Birthday as the soundtrack. The final 30 second cut lived on my work computer for over a decade, copied over with all of my files each time I got a newer PC.

Last week I decided to try to get it onto my iPhone. I guess I could have done a USB iTunes to iPhone transfer, but that would have meant upgrading the decades old iTunes that I never use at work. So I emailed it to myself via Gmail.

It opened fine on my iPhone, but the sound would not play. I opened it in iMovie and then managed to add Birthday to the soundtrack. Here I digress. For reasons unknown iMovie would only recognize recently purchased songs on my iPhone. Here I digress again, I just discovered that you don’t get the iCloud download icon in Music if WiFi is turned off. I can’t find the setting in 8.1.2 to make it visible. Back up one digression, so I repurchased Birthday and used it.

However, when I attempted to save it back to my camera roll I got an error. After many hours of frustration I decided to look for video format converters on the Apple App Store. I ended up buying two:

The Video Converter – Convert videos to and from file formats! by SmoothMobile, LLC https://appsto.re/us/rD2p1.i

I am not endorsing either of these … and there are many others to choose from.

The original version of The Race was in MOV format and needed to be converted to MP4 format. Once done, I could export it to the camera roll. Then I decided that Born To Be Wild would be a better fit. So I redid the 30s clip again.

Now to upload to Vimeo.

All for 30 seconds of audio. How do others get away with uploading entire songs, albums, music videos, movies?

Alas it is what it is. So I searched iTunes for Royalty Free Music, found

and chose the first recording for the soundtrack. It was 99 cents.

I don’t know anything about DRM (Digital Rights Management), but I have to assume that that 30s clip of  Born To Be Wild had a DRM tag that immediately told Vimeo “NO NO NO”. I suppose it could have checked a Shazam-like audio database, but how does that explain all the other entries the are longer and more blatant. I assume there is a way to strip off the DRM tag. I need to investigate this.

There has got to be an affordable way for individuals to license mainstream audio at an affordable price for use in homemade videos posted to the web. See my rant https://contrafactual.com/2014/12/14/21st-century-i-p-2/

Speaking of old-school, if you haven’t seen it check out the 1979 Wizard of Speed and Time by Mike Jittlov

3 thoughts on “The Race – Backstory”