I started this essay a while ago, but I never finished it.
If you haven’t read Welcome to the Future, I suggest that you start >> HERE <<

Excerpted from Welcome to the Future

In 1968, a year before Neil and Buzz first frolicked on the Moon, Metro-Goldwyn-Mayer released Stanley Kubrick’s epic 2001 A Space Odyssey. I begged and pleaded with my dad to take me to the Miami showing which debuted in 70mm ultra-widescreen Cinerama – the IMAX of its day. The 142 minute long movie was unique in its realistic depiction of space flight, with ground breaking special effects and a powerful musical score. It was equally unique in its use of long periods of silence to portray the vast distances and length of time required to travel to Jupiter. The original showing even had an intermission. 2001 opened to mixed reviews. My dad and I mirrored the critical and public sentiment. He thought it was long and boring. I thought – and still do – that it was the greatest science-fiction movie ever made. If you have seen 2001 A Space Odyssey you know what I am talking about, if not Wikipedia, the Internet Movie Database, and numerous fan sites do a much better job of describing it than I ever could. If you like science-fiction and have never seen 2001 you really owe it to yourself to see this film.

Recall that in the ’60s and ’70s there was no such thing as VHS tapes, DVDs, or digital downloads. If you wanted to see a movie you either went to the theater to see it, or hoped it would be shown – cut and commercial-filled – on TV. Fortunately 2001 enjoyed frequent returns to theaters after its 1968 release, albeit in 35mm format on a much smaller screen. It enjoyed a cult following in part due to the spectacular light show at the end of the movie. I saw 2001 A Space Odyssey every time it came back to the theater, often multiple days in a row, often multiple showings in a row. I lost count of the number of times I had seen it after my twenty-second viewing. My dream was to someday be rich enough to have my own home theater and a film copy of 2001 that I could watch whenever I wanted.

2001 A Space Odyssey depicted the video phone, video tablets, and the quintessential sentient computer, HAL 9000. The technology may not have existed yet when I was a kid, but the ideas did and I wanted all of it. I dreamed of video phones and personal communicators. I dreamed of having my own computer that could answer any question I posed of it. I dreamed of the future.
2001

Despite the Y2K (year two thousand) “panic”, the new millennium did not actually begin until January 1, 2001. That is because there was no year zero. The current calendar starts with year 1 A.D. (alternatively C.E.). Thus 2001 marked the beginning of the new millennium. This is why Kubrick and Clark chose the name 2001 A Space Odyssey.

As a teenager in 1968, I envisioned the year 2001 to be the dawn of a fantastic new world. In 1968 the world of 2001 was thirty-three unimaginable and somewhat frightening years in the future. Who would I be in 2001? Where would I live? What would I do? Would I be married? Would I have children? Would I be alive? What would the world be like? Would we have permanent settlements on the Moon? Would humanity even be alive?

First notice how little has changed since 1959. Second despite the dark humor, please realize that fear of nuclear annihilation was ever present throughout my teenage years. I personally think that global nuclear annihilation is less likely now than it was fifty or so years ago, but I am less optimistic regarding localized nuclear engagements or terrorist attacks. I actually think that although our fears have subsided, the real danger may have increased.

I plan to address Negrophobia and U. S. race relations more in a later post, but I think it is safe to say that much has changed both in the U. S. and around the world since the 1960s. For some folks, things are better, for others maybe not so much. Still I remain hopeful and optimistic. Much more to say in future …

I’d have given anything to have my own PacMan game at home.
I used to have to get a ride down to the arcade. Now I’ve got it on my phone.
Brad Paisley, “Welcome to the Future”

A month or two ago I had an epiphany while driving into work (possibly listening to some obscure “teenhood” song playing on my iPad streaming via Bluetooth to my Prius sound system). The epiphany was that everything I could have hoped for as a kid had come to pass. I have my own human-enhanced computer database that can answer any question I put to it (so does everyone else, but I will gladly share). I have near instant access to any book, song, or movie from my childhood, teenhood, present, and just about any other era. I have my own computer/vidscreen/music player/communicator that I carry with me at all times. I have HAL 9000 as the wallpaper of my iPad. 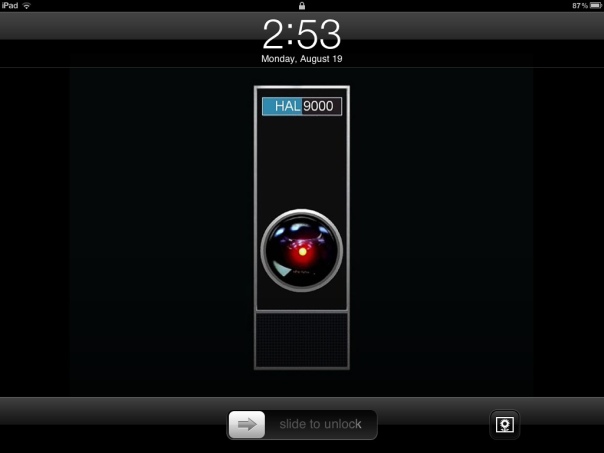 By the way, the stock symbol of the company I work for is … HAL. I’m not making this stuff up.

And as icing on the cake, number one son graduated high school in the Class of …DUN DUN DAHHH, DA DANH … 2001. I mean seriously how cool is that.
Next >> Momma’s got tunes