In the distant past, a forgotten shepherd stares up at the sky, studying the bright red dot that drifts night to night among the background of stars. 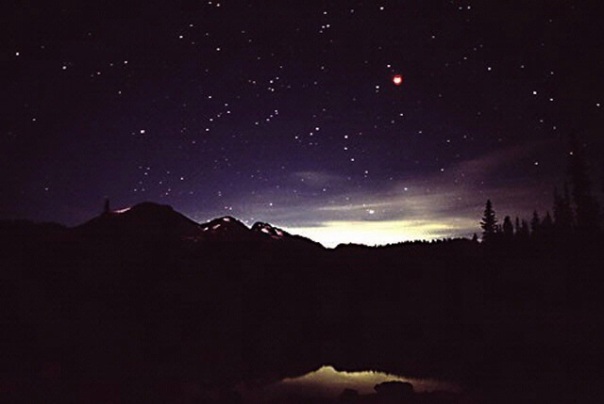 The ancients called it Ares, Mars, Al-Qahira, to name a few. Its blood-red color imbued it with foreboding. The ancient Greeks and Romans honored it as their god of war. 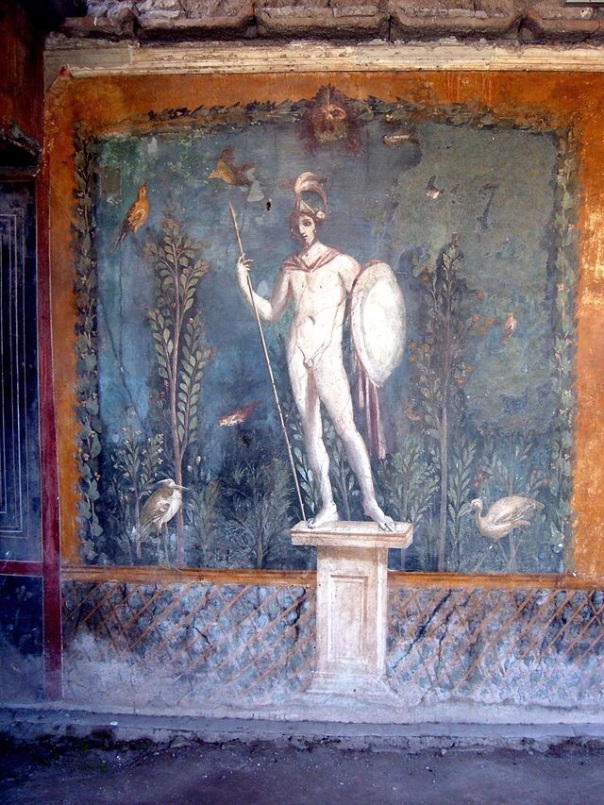 Learned scholars eventually postulated that Mars was a planet perhaps similar to Earth. With the advent of the telescope, Giovanni Schiaparelli, and later Percival Lowell captured the collective imagination with descriptions of intricate Martian canal systems. Such intricacy could only have been fashioned by a intelligent race of beings – an ancient race desperately trying to irrigate a dying world.

In the mid to late twentieth century, Mars became the focal point of many science fiction and fantasy short stories, novels, and movies. Edgar Rice Boroughs’ John Carter of Mars, H. G. Wells’ War of the Worlds, Ray Bradbury’s The Martian Chronicles are but a few of the famous and infamous tales of Mars.

Yet as scientifically authentic as the movie above purported to be, 1965 proved to be a cruel year for those who pinned their hopes on an Earth-like Mars. The Mariner 4 fly-by of Mars revealed a cratered planet more like the Moon than the Earth. 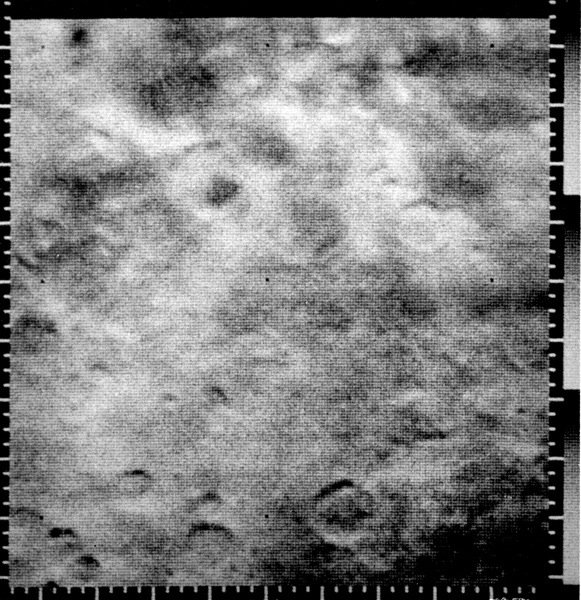 Each new robotic probe arriving at Mars depicted a cold dead world, whose thin dry carbon dioxide atmosphere would not be able to support human habitation. Yet this did not deter the scientists and the dreamers. Sophisticated robotic rovers were sent to Mars to “follow the water,” uncovering an ancient Mars with seas and rivers that might once have been able to support at least primitive life.

The dawn of the twenty-first century inspired new dreamers such as Kim Stanley Robinson, famous for his Red Mars, Green Mars, Blue Mars science fiction trilogy. Historians still marvel at how accurate his portrayal of early Martian colonization would prove to be.

Perhaps the single most important visionary with regard to the eventual colonization of Mars was Elon Musk, founder and CEO of SpaceX and Tesla Motors. Musk, the universally acknowledged founder of commercial manned spaceflight, hoped to one day walk on Mars himself and planned to put human boots on Mars by the third decade of the twenty-first century. In an interview with what was then NBC News, Musk conceded:

“I’m hopeful that the first people could be taken to Mars in 10 to 12 years, I think it’s certainly possible for that to occur. But the thing that matters long term is to have a self-sustaining city on Mars, to make life multi-planetary … We need to get where things are steady and predictable. Maybe we’re close to developing the Mars vehicle, or ideally we’ve flown it a few times, then I think going public [with SpaceX] would make more sense.”

Sadly, Musk’s dream of walking on Mars was not to be. He died tragically during the 2071 Pan-American EV Challenge off-road rally while at the wheel of his beloved vintage Tesla Model X. He entered the race to celebrate his 100th birthday and was killed in a freak accident indirectly caused by the re-entering Destiny Module of the then defunct International Space Station. Apparently the townsfolk of Sierra Gorda, Chile had come out en masse to watch the fiery re-entry of the Destiny Module overhead and Musk was forced to swerve to avoid plowing through the crowd. His Model X rolled over many times before the lithium ion battery pack was punctured and caught fire. Legend has it that Musk might have been able to survive the crash if the battery had not ignited. Even to this day historians debate what Musk’s legacy might have been had his life not been tragically cut short.

Below is an artist’s conception circa 2010 of SpaceX landing on Mars.

Musk missed his target of putting human boots on Mars by 2030. The world would have to wait until 2055 for that to occur when a privately funded mission designed, built, and executed by SpaceX-Boeing and Bigelow Aerospace finally landed a multinational crew of seven astronauts on the Martian surface. By then SpaceX-Boeing had established a thriving business of ferrying government, corporate, and private individuals to the numerous Bigelow inflatable low-Earth-orbit space stations and contract-built lunar outposts.

Below, a model of an early Bigelow Aerospace lunar base, circa 2030.

Below is a 2013 depiction of a Bigelow inflatable habitat in orbit above Mars. 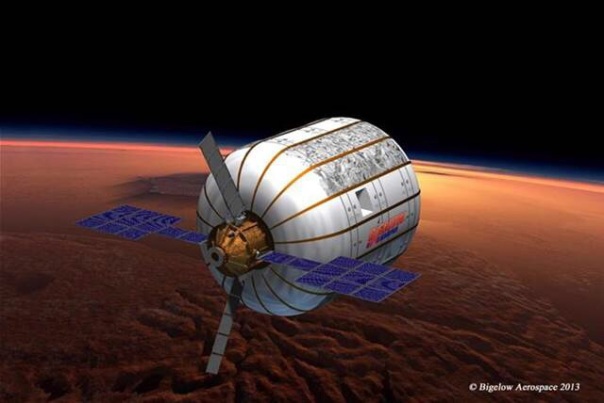 The first seven-person Mars lander (based on the SpaceX Dragon V2) is shown entering the Martian atmosphere in this artist’s depiction. 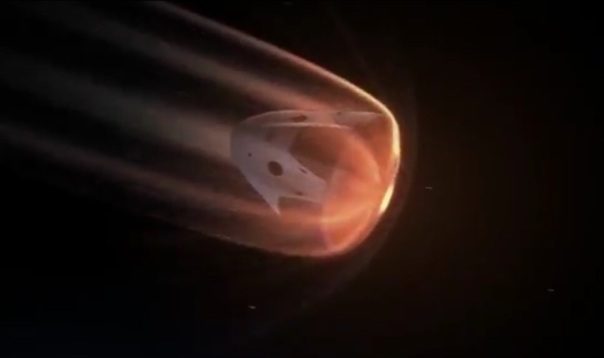 Every Martian knows the names of the Mars Seven (the first humans on Mars): Mission Commander Sarah Radstrom, Pilot Maggie Trznadel, Crew Chief Hillary Edmundson, First Science Officer Lenny Yomin, Environmental Officer Rolf Redan, Flight Engineer Nole Moschatus, and who could ever forget little Timmy Enelpozo de Agua. They became famous overnight, even though not a single one of them would ever set foot on Mars again. Following their triumphant return to Earth they were treated like conquering heros, but after the initial thrill of the first footsteps on Mars had passed, governments and private investors began to look at the costs incurred. One excuse after another was put forward for delaying the return to Mars. Too costly. Too dangerous. Robotics are cheaper and less risky. Been there, done that. The colonization of Mars continued to face one setback after another.

Make no mistake it was an expensive proposition to establish permanent cities on Mars. Very expensive. Hugely expensive. After decades of war in Iraq, Iran, Afghanistan, Pakistan, and Bangladesh the US was in no position to even partially fund the colonization of Mars. In the last years of the twenty-first century, the US was still paying for its involvement against the Bengali separatists.

China was the first nation to establish a permanent presence on Mars beginning with the 2099 landing of three Taikonauts on the Martian surface. The landing marked the 150th anniversary of the founding of the People’s Republic of China and the 60th anniversary of China landing on the moon. China maintained a more or less permanent Martian presence until the CME of 2135 wiped out all settlements save the fledgling colony of New Masdar.

New Masdar itself survived only by the merest of luck. Both it and Phobos were on the leeward side of Mars when the Coronal Mass Ejection of 2135 slammed into Mars, frying the electronics of orbiting satellites and all other surface installations.

New Masdar from orbit circa 2120

A Brief History of Everything

1 thought on “A Brief History of Mars”