Peated to an exospheric 2064 PPM, eight times that of the previous record holder OCTOMORE 06.3/, this extraordinary dram embodies its Islay origins and carries its phenol count like a Falcon soaring into the sky.

Character
Mind blowing in potency with perfect balance. The texture is like molten gold straight out of the furnace, the taste rich with an intense character that can only be found on Islay and the Atlantic beaches of sunny Florida.

Nose
It opens with a roar of ignition, thundering pulsing waves of searing heat driving a scorching hurricane onto the beach and incinerating the wild plants before it. Notes of charred concrete and superheated rebar drift across the nose, followed by an onslaught of smoke as if all of the peat bogs of Scotland were ablaze at once. Ozone and a hint of unburned kerosene dance in perfect harmony with the strong uplifting peatiness of the Islay grown barley. It is literally unlike anything else.

Palate
Heat. Heat and flame and more heat. Heat infused with smoke and heat and more smoke. The lips and tongue are reminded of the sensation of smoking a pipe – an exhaust pipe. As the heat builds it is accompanied by the spontaneous detonation of road flares and flash bangs. It is a taste like no other, a whiskey on fire, uncut, unfiltered, unthrottled. This is scorchery.

Finish
Long and hard. The ears continue to ring long after lips, tongue, and throat have lost the ability to feel pain. It evokes memories of every rocket that ever exploded on the launch pad or during flight. Join us as we look to the past while rocketing into the future.

Mood
The heat and smoke just keep increasing to the point where it is driving you crazy with joy and you want to call the paramedics and tell them what is happening. Relax and keep it to yourself – no one will believe you.

OCTO X is the result of a unique collaboration between Bruichladdich – the makers of OCTOMORE and SpaceX – the worlds preeminent commercial space launch company. After traditional roasting at Bruichladdich’s Port Charlotte distillery, the malt is flown by chartered private jet (flying non-stop zero-G parabolas) to the SpaceX launch facility at Space Launch Complex 40 at Cape Canaveral Air Force Station on the South Florida East Coast. Here it is lovingly shoveled into the flame trough of the SLC 40 launch pad for a second roasting during the launch of a Falcon 9 rocket.

After launch, the roasted malt is then returned to Islay for additional roasting, fermentation, and distillation. For five long slow years it rests in octuple-charred barrels of American White Oak breathing in the sea air of Islay and mellowing the fires of its birth. It is then “finished” in the reclaimed fuel tanks of a used Falcon 9 first stage.

The name OCTO X pays homage to the Octomore farm from which its barley was produced, the OCTOWEB engine arrangement of the latest generation on Falcon 9 rocket, and of course SpaceX without who’s cooperation this unique dram would not have been possible.

This is of course a work of pure fiction. Parody. Satire.

As you know I love peated whisky. The smokier the better. The Islay whiskies are the smokiest of all. My whisky cabinet is replete with a variety of Islay whiskies. When I can find it (and afford it) one of my favorites is Bruichladdich OCTOMORE. I am also a big fan of Elon Musk and SpaceX. A quick search of this blog will reveal many posts covering Bruichladdich, OCTOMORE, and SpaceX.

While researching my post on OCTOMORE 06.3/ 258 PPM I ran across a YouTube review of OCTOMORE by someone who clearly did NOT like peated whisky. That got me thinking about writing a review for a fictitious peated whisky that was so clearly over the top that even peat lovers would get a chuckle out of it. OCTO X is this whisky.

This post is a tribute to Bruichladdich and SpaceX, whose forward thinking are propelling us into the 21st century and beyond.

FOR THE VERY FIRST TIME WE ARE PROUD TO RELEASE OCTOMORE WHISKY DISTILLED FROM 100% ISLAY BARLEY AND HARVESTED IN 2008 BY FARMER JAMES BROWN AT LORGBA, A SINGLE FIELD ON HIS OCTOMORE FARM.

Peated to a stratospheric 258ppm, the highest ever released in the industry, this extraordinary dram embodies its island origins and carries its phenol count with an effortless grace.

High on the hill above Loch Indaal, Octomore faces the rage of Atlantic weather systems and once housed its own farm distillery, most likely producing a very heavily peated spirit from home-grown barley.

In homage to its origins, this is Octomore of Octomore. 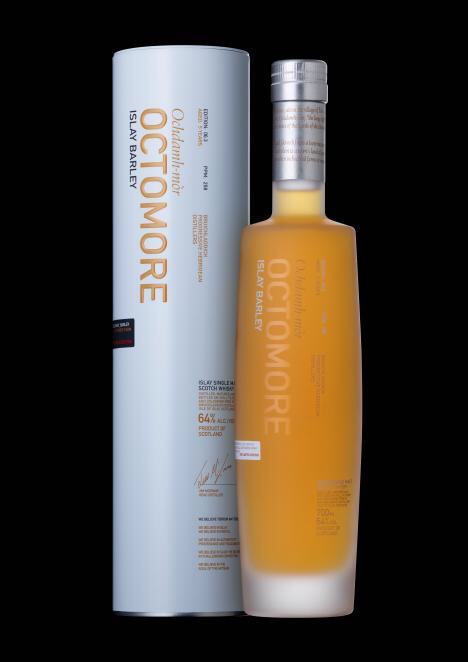 Character
Mesmerising in its potency – with perfect balance. The texture is like warm honey, the taste rich with a depth of character that can only be found on Islay.

Nose
It opens with the call of the sea, the thundering west coast waves driving a gentle mist onto the moorland and tempting the wild plants to release their unique aromas. Notes of myrtle, meadowsweet, mint and heather flowers drift across the nose. Wild thyme and red clover dance in perfect harmony with the strong uplifting peatiness of the Islay grown barley. It’s exhilarating, and seriously dramatic.

Palate
When the heat of the peat fires cool there is a spontaneous detonation of soft red grapes, cherries, Russian toffee, bitter chocolate, maple syrup and mellow oak. It is a taste like no other, a whisky cut loose, unhindered, unchanged. This is sorcery.

Finish
Long and strong, it warms the soul and lifts the heart. It evokes memories of those early years when the sweat of men instilled the spirit with a unique character. Join us as we look to the past, celebrating our Islay DNA while journeying into the future in a never-ending quest for the rainbow’s end.

Mood
The flavours just keep evolving to the point where it is driving you crazy with joy and you just want to tell the world what is happening. Relax and keep it to yourself – it’s not for sharing and when the glass is empty you will feel like the ultimate warrior.

Available from The Whiskey Exchange

Santa, are you reading this?

Despite the name of the BBC Travel article below, it is actually mostly a review of my favorite peated single malts from Islay.

(True Scotsmen, please correct my pronunciation as needed. I hope I am close.)

A Critmas present from a very good friend.

The video says it all.

In an alternate reality I would retire to Islay, preferably in or near Port Charlotte.

Recently, we here at BWG have inadvertently relegated our Ardbeg consumption to their special annual releases (you can read all our Ardbeg reviews here) and seem to have overlooked some of their more regularly available stuff. That has been a mistake… Ardbeg Uigeadail’s nose is like an enchanted forest of flavors. It starts off with a beautifully complex blend of earth, oak, moss, wild blackberries and raspberries and Ardbeg’s typical, ever present, but not overpowering peat smoke. The palate is a fresh, hand-picked bouquet strewn over smoked wood chips. A few drops of water open up the fruity and floral notes, while adding a creamy texture to this smokey mountain of flavors. The finish is smooth and warm with some sharp cracked peppercorn and fading peat smoke. Uigeadail is beautifully complex and balanced. For BWG it’s by far Ardbeg’s best regular offering. Available in store and online at Gates Circle Liquor for $106

Sitting here drinking and smelling my OCTOMORE 06.1 167ppm in a Glencairn Glass.

All of the senses are involved. For a five year old scotch, this stuff is fantastic. Hell fantastic period.

If you LOVE, smoky sweet delicious scotch, you must try OCTOMORE.